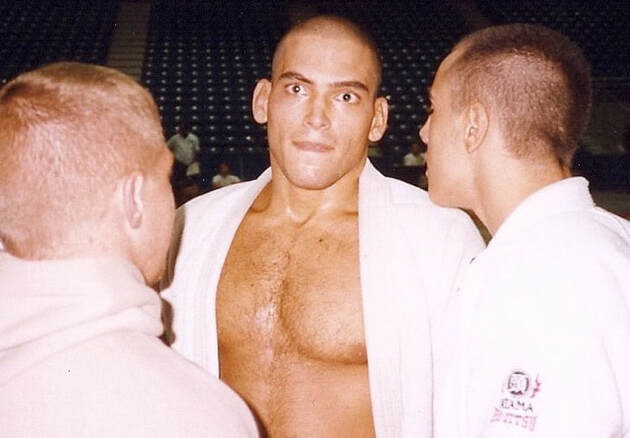 Learn to
CONQUER FEAR ON DEMAND
Dustin Denes is here to provide you with a winning edge.﻿

Born and raised in south Florida, Dustin is driven by strong work ethic. From his own championship achievements to making champions around the world, Dustin continues to take ordinary people from average to exceptional.

Dustin [Clean] Denes is a 5th degree Black Belt in Brazilian Jiu-Jitsu, master instructor and world-class competitor﻿ supreme. He is best known for his accomplished submission skills. Dustin’s knowledge is both battle-tested and backed by teachings of the Club Carlson Gracie, Marcus Silveira, Murilo Bustamante, and Ricardo de la Riva.

In 1999, Dustin traveled Brazil with his friend and mentor Antônio Rodrigo [Minotauro] Nogueira. He then moved to Rio de Janeiro to maximize his progress in ﻿﻿Brazilian Jiu-Jitsu. He spent more than two years as a brown belt with the Brazilian Top Team, competing against and beating the best in Brazil. He became Brazilian Champion in 2000 and achieved the rank of Black Belt in the fall of 2001.

Dustin is cultured in The Art and The War of Brazilian Jiu-Jitsu. His competition experience in Brazil alone exceeds hundreds of matches, combined as a Purple, Brown, and Black Belt. His most competitive years as a kimono fighter were spent battling amongst the best in Rio de Janeiro and São Paulo, Brazil. Inspired by winning results, one of his many signature submissions earned him an addition to his nickname "Clean, o Rei do Triângulo" which translates to "Clean, King of the Triangle."

After a professional mixed martial arts debut in Japan, Dustin returned to the United States and accepted an opportunity to be part of a new team. He chose to compete and strive for success in Mixed Martial Arts for years to come. Dustin played a major role in the founding and first generation of the American Top Team.

Dustin is a Master Jiu-Jitsu Expert and Strategist speaker. He earned a BS in Marketing from Florida State University and an International MBA from Florida International University. However, real world education and global achievements provide him his sharp edge. Fluent in Portuguese, his goal is to further excel in the world of martial arts, and to transmit his knowledge through his teachings, inspiring youth and helping kids to beat the streets.
Powered by